What is neonatal surgery?

Neonatal surgery covers a range of surgical procedure carried out on new-born babies. New-born babies will require surgery if the condition is life-threatening and are often extremely rare, however, some conditions that are operated on are relatively minor problems. Some of these conditions will have been picked up prior to birth in routine scans, but some won’t be detected until after birth or develop in the weeks following birth. 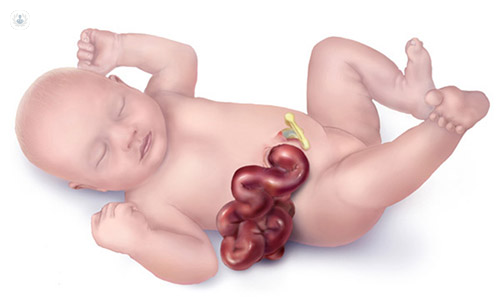 Why is neonatal surgery done?

The conditions that are found in pregnancy scans are often a result of a baby not developing properly. For example, exomphalos is one of the conditions that is operated on by neonatal surgeons. This condition is caused by the incorrect development of the tummy wall, causing the bowel to remain on the outside of the baby’s body. Again, the severity of this can range from minor to complex.

Another condition commonly fixed by neonatal surgery is gastroschisis where a hole in the tummy wall develops next to the umbilical cord, allowing the bowel to float freely in the amniotic fluid, coming into contact with the baby’s urine and faeces which can result in inflammation. Hence, surgery is needed to ensure the bowel is returned to the abdominal cavity and the hole closed.

The following conditions are those that can suddenly develop very soon after birth which require surgery:

What does neonatal surgery involve?

Surgery will depend on the type of condition and the complexity of it. For example, more complex cases of exomphalos may require several surgeries to fully deal with. This is known as a staged repair and will involve an operation to envelop the external bowel, with further surgeries needed to repair the tummy wall. Further surgeries may be needed to repair hernias that arise as a result of previous surgeries. Some babies will need to be kept on a ventilator to help with breathing. For these procedures painkillers are given to the baby to manage pain.

How do you prepare for neonatal surgery?

Having your new-born baby require surgery can be an emotional and difficult reality for parents to face, and as much as possible, the medical team treating your baby will be there to provide information, support and regular updates on your baby’s progress. There are also special neonatal centres around the country.

After operating, a surgeon will often have a good idea of what the recovery will be like for the baby, which can give parents a rough set of expectations for surgery. However, baby’s having neonatal surgery will require a hospital stay and round-the-clock monitoring to ensure any complications that arise are managed. Following discharge from the neonatal ward, your baby will require frequent check-ups to monitor their progress.

Any cookies that may not be particularly necessary for the website to function and is used specifically to collect user personal data via analytics, ads, other embedded contents are termed as non-necessary cookies. It is mandatory to procure user consent prior to running these cookies on your website.